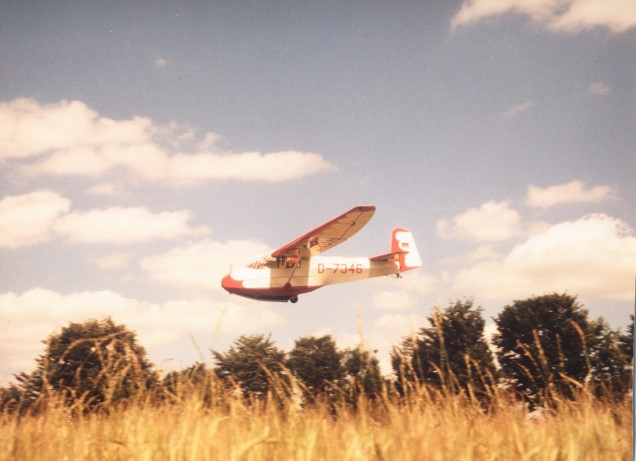 On March 9th, 1958, the statutes of the Cercle Luxembourgeois de Vol à Voile are signed by 35 gliding enthusiasts.

At first, the new club has neither land nor flying equipment, but following the dissolution of the gliding section of the L.A.S.E.L. (the League of Luxembourg Student Sports Associations), the CLVV recovers the flying material of this section and can continue to exercise its sports activities on the "airfield" in Reichelange.

The "airfield" in Reichelange presents many difficulties in the practice of gliding, in particular by its limited runway length of barely 600m. After an unsuccessful search for a more suitable site in the Grand Duchy, the CLVV left Luxembourg at the end of 1958 and now operates on the grounds of the gliding club in Basse / Yutz near Thionville, France where it stayed until 1963.

The end of 1963 saw the return of the CLVV to the Grand Duchy where members found a piece of land on the "Besenerbierg" in Reckingen / Mersch. Unfortunately, this field too is too small to house all CLVV members with their full equipment and as a result, the club separates. In 1962, the "Nordistes" gathered around the instructor René Geiben under the name of "Sailing Club of the North " and exercise their sport after many works on a field in Useldange.

In 1967, the "Southern Gliding Club" was founded in Dudelange, but as these members have neither flying equipment nor adequate ground, the flying exercise continues with the help of CLVV.

The winter of 1969/1970 marks the end of the gliding activities in Reckingen as the land-owners terminated the lease. Once again, the search for suitable land is relaunched but is still fruitless in Luxembourg. Thus, the CLVV is obliged to leave the Grand Duchy a second time, this time as a Virton destination in Belgium. All sports facilities are dismantled and reassembled in Latour near Virton.

During the winter of 1973/1974 the CLVV left Belgium again. As the "Northern Gliding Club" has land in Useldange but only has a few members, the two clubs merge in 1974. After years of nomadic life on different terrains in Luxembourg and abroad, the CLVV finally finds its permanent base in Useldange. Endangered a few years later (in 1979) by the will of the owners to sell part of the land, the Luxembourg State intervenes and acquires the parts of land necessary to guarantee the continuation of the gliding sport.

Carlo Lecuit obtains the Prix Paul Tissandier awarded by the FAI in 2004 and was President of the FAL from 2006 till 2016. Started in 2008 by Arnold Weber, the "Sauer Cup", is now part of competitions at cross-border level in which CLVV pilots compete with their comrades from German clubs Kontz and Utscheid.

Since 1974, the airfield of Useldange is exploited exclusively by the CLVV which has been fully developed with the incessant common work of its members and the substantial financial support of the Luxembourg State . Thus, the CLVV has a hangar of 1200 m2 and a grass strip of 1000 meters long and 60 meters wide. Useldange is today the site of "The National Gliding School " and the "National Gliding Center".

In 2018, the CLVV owns 6 gliders (3 single-seaters and 2 double-seaters) and a motorglider. The club thus has a complete type of series, from the glider to the glider with retractable motor and a touring motor gliderl.